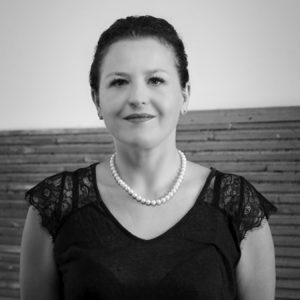 Irena Kregar Šegota graduated in English and French Language and Literature at the Faculty of Philosophy in Zagreb and Maritime Economy at the Maritime Faculty in Rijeka. She studied cultural management, cultural policies and cultural relations at Zadar University (European Studies: Languages and Cultures in Contact), at the Chambre de commerce de Paris, Observatoire des politiques culturelles de Grenoble and Ecole Nationale d’Administration in Paris.

After being the executive coordinator and in charge of international relations for Rijeka ECOC 2020 bid, she presently holds the position of the Director for Partnerships and Participation at Rijeka 2020, the agency responsible for the implementation of the Rijeka 2020 European Capital of Culture project.

Her previous professional experiences include the position of advisor for international cooperation in culture at the Rijeka City Hall, work for the Rijeka City Puppet Theatre (marketing and PR department, and as coordinator of Rijeka International Puppet Festival), work for the Croatian Ministry of Foreign Affairs and teaching positions at high schools in Rijeka.  She was the president of the Alliance Française in Rijeka 2003 – 2018 and the vice-president of the European cultural network Les Rencontres – LIKE 2015 – 2019.  Fluently speaks English, French and Italian.